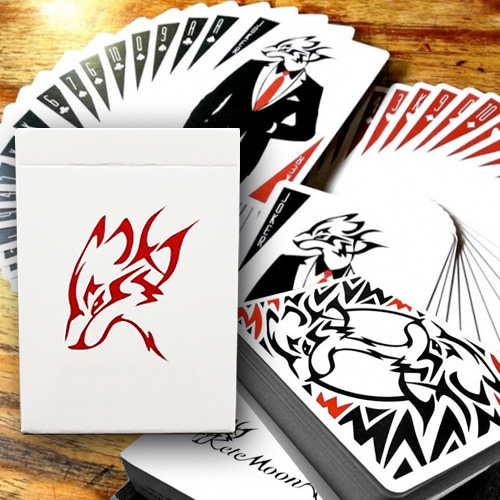 Kete Moon, the well-known playing card blogger, collector and photographer. We are honored to have this opportunity to work with Kete Moon and release his very own deck. It took us a whole year of preparation and planning, eight months of picking designs, and we’ve also eliminated countless drafts,and unceasingly amending details. Since this is Kete Moon’s very own deck, the whole design is basically all based on his personal image, the wolf, we then added some other ideas to the core concept, and all further designs are also accomplished at his request before we present this definitive edition to the world.

This deck is completely customized, we’ve redesigned every single detail of it, it’s not only more than just a usual deck of cards, but a brand new kind of deck that’s going to blow your mind. We’ve collected tons of materials and images,and combined it with the elements we adore after that. At the same time, we’ve spend quite a long time testing whether it works well while we do the spin, the spread and the card fans by using this deck of cards. The design of the value is totally unprecedented, you can also find some little designing secrets on the back of the cards, and a moving circle on the face while you flip the deck. This is the perfect deck for not only magic tricks and card flourishes, but also the usual poker games with your family and friends.

Unlike the usual deck, all four aces have it’s very own design. The three court cards, Jack, Queen and King, each presents the personal image of three designers of our studio, Hanson Bomb, Eve Liu and Kete Moon. We even added a special design on the jokers, if you look carefully on the face of two jokers, you are going to find a tiny number on the front pocket of it’s suite, which works the same as a prediction, and not only that, there are two colors of back for the color change effect. These special designing ideas we added on jokers are going to allow you to come up with many other unique tricks, and this is one of the best difference of this deck and the other usual deck.