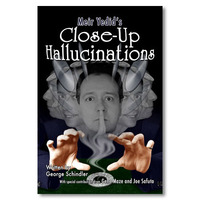 Meir Yedid was the first person to win the Society Of American Magician's Close-Up Magic Championship more than once. He was also awarded the Society's rarely presented Originality Medal. Meir has spent the last 30 years touring throughout the world performing and teaching his brand of creative magic.

This book features some of Meir's offbeat magic with coins, cards, sponges, cereal and fingers. As an added bonus the book includes additional routines by Gene Maze and Joe Safuto. All of these routines are visual and memorable.

Also taught are all of the techniques used within the routines. Original techniques include: Almost Perfect Vanish, Half-Fist Sponge Steal, Tabled One-Hand Vanish, and much more. Written by George Schindler and illustrated by Fred Kraus. Second edition published by Meir Yedid Magic in 2011.