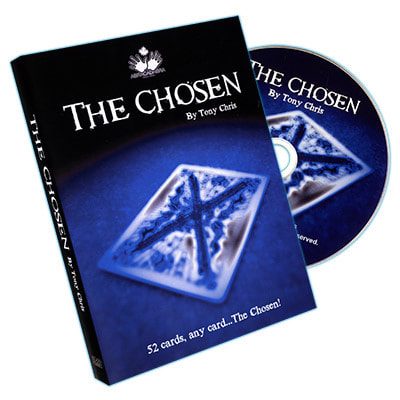 The Chosen by Tony Chris - DVD

A deck of cards. Nothing more, nothing less. Any card is named. It will be the only one marked with an X. This is what your spectator will experience and it will rock them! This Is The Chosen.

The Chosen is just one of the performance pieces on this DVD from TONY CHRIS. You will learn several methods for the "X" marked card that will leave your audience stunned! This DVD also features live performances, useful tips, other ideas with The Chosen deck, an in depth discussion about the psychology of The Chosen effect and very detailed explanations showing you all the work behind these wonders.

Also includes routines by special guests Matthew Johnson and Martin Waring, who offer their Gothic take on The Chosen. Enjoy the following performances:

This DVD is packed with great material that you will use. The Chosen is a beautiful, anytime, anywhere card effect. Includes the gimmick for Destiny's Number.

IMPORTANT NOTES FOR THE CHOSEN EFFECT: