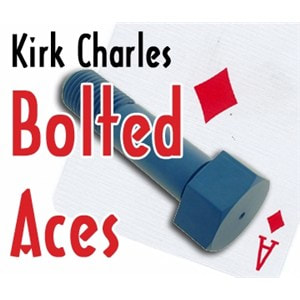 Regaling your audience with stories of magic yore, you discuss the story of a competition among magicians: finding the Aces in a shuffled deck. One man in particular boasted to being the fastest, able to find the Aces using any deck. One young con man took him up on the challenge, presenting him with a deck that had been bolted together!

Demonstrating your fable, you show a bolted deck, riffling through it to display the Aces. Explaining your certainty you can succeed where your predecessor had failed, you pantomime removing four cards from the deck, placing them in your pockets.

Fanning through the deck, the Aces have vanished! You casually remove the Aces from your pocket as your audience goes wild.