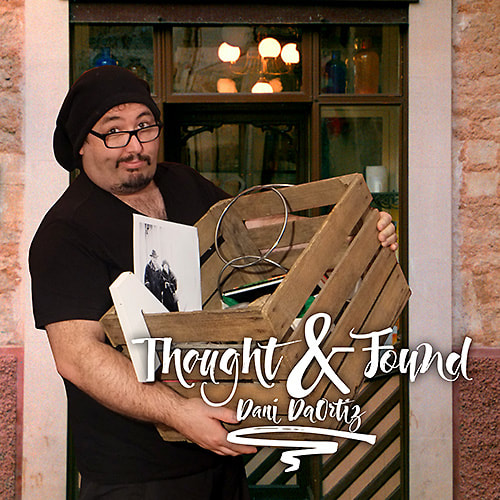 Dani DaOrtiz: amazingly accomplished Spanish magician! Dani is well known for his unconventional style. His use of improvisation allows him to create incredibly dynamic routines.

Thought & Found is a fantastic card routine that utilizes a very special deck for an unbelievable Double Punch finale.

The magician puts a blue backed card face down onto the table and states that this card will be ANY card a spectator names.

Looking at the first spectator, he asks him to name the card HE WANTS the blue card to be. Before he will reveal, if that named card is really the one on the table, he lets a second spectator choose a card from a red backed deck.

The spectator loses this chosen card in the deck and places the deck inside the empty magician's pocket.

Now it's time for the Double Miracle: The magician puts his hand in the pocket and immediately pulls out the spectator‘s lost selection. He then asks the first spectator of what card he was thinking. The magician turns over the blue backed card on the table: the thought of card had been sitting there the entire time.

• Resets in less than 2 seconds.

• Only one deck poker size is used.

• The instructions are supplied through a practical download link.