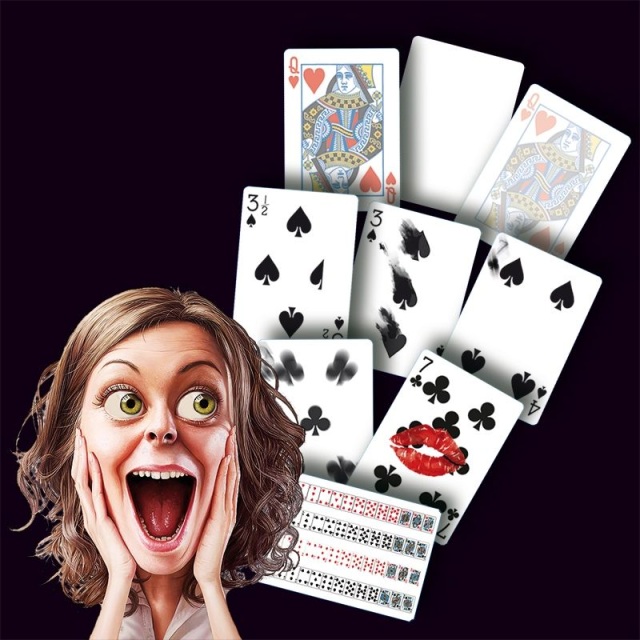 Here is a great set of Gaff Cards!

- A card is selected and shuffled back into the deck. A femail spectator blows a kiss towards the deck. Magically her kiss finds the selected card and appears on it!

- You show a card, saying that it has just been printed and the paint is still fresh ... you then proceed to magically completely smuge it!

- Show a card, then quickly shake it so that the spectators can now just see a blurred image. When you stop shaking the card will continued to look blurred!

- Show a queen of hearts, a stroke and it starts fading away. With another stroke it fades away even further. With a last stroke the queen fades away completely, leaving behind just a white card!

- A card is selected by a spectator. You then bring attention to an envelope (not supplied), proudly announcing that inside it there is the spectators selected card! When the envelope is opened there is a card with all 52 cards printed on it! After a small joke, the card is turned over, and on the other side… is the spectator’s selection!

- After apparently findinfìg the wrong card, the magician smugges the corner of a card changing it into the card selected by the spectator!

The set includes: kiss card - 3 and a half spades - fresh paint card - blurred card - fade out queen - 52 cards on one with climax - metamorphosis index card.

In addition to the set, a regular Bicycle blue backed deck is supplied.

• All the gimmick cards are printed by USPCC.

• The set comes with tips on how to use the cards!