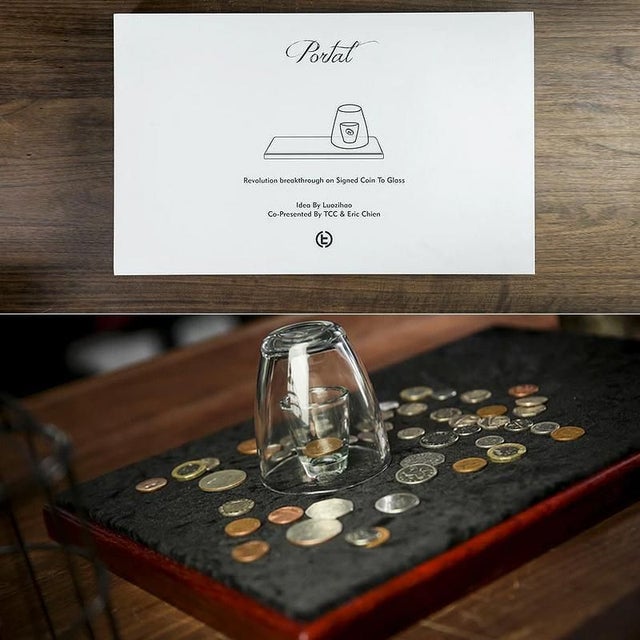 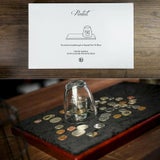 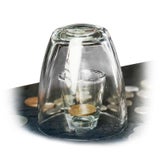 "Portal is a Revolutionary Breakthrough on the Signed Coin to Glass effect!

The Coin Through Glass effect is one of those rare effects, where so simple and straight forward can create such a powerful impact in the audiences mind.

A coin, signed by an audience member, vanished, then suddenly teleports and appears between two glasses in an instant, accompanied by the sound of coins as if falling from the air.

Due to the extremely popular nature of the effect, there are many effects on the market surrounding this premise.

What we are presenting today is our version of the effect.

Nearly 16 months in development, three redesigns and reworkings, dozens of optimization and improvement tests. Here for you what is perhaps the Ultimate version of Signed Coin to Glas: Portal.

Only one coin is used from beginning to end. No switch is necessary.

Two methods of control. It has physical button controls on both left and right sides, as well as a remote control. The effect can even be performed totally hands off.

It has a 1800mAH lithium battery that can last for 80-100 performances when fully charged.

Uses a magnetic charging port and has a convenient power indicator.

The extremely deceptive pad surface is made by Eric himself and is what Eric uses for his own performances.

The frame of the close-up pad is made of high-quality red rosewood and looks very grandiose even when used as an ordinary close-up pad.

Due to the extremely limited interior space and strict control of how thin the pad can be, more than 40 components had to be carefully designed to fit efficiently.

From the idea conception to the final production, it took nearly 16 months, three redesigns and reworkings, and dozens of optimization and improvement tests.

Due to the complex structure and high precision requirements, even at the mass production stage, more than 50% of the construction and assembly processes need to be completed individually by hand.

The coins used can be up to 38mm in diameter. However, due to its weight and size, a half-dollar is considered relatively large, the bounce speed is not as fast as that of small coins. Therefore, the smaller coins are preferred. (A US Quarter is 24.26 mm in diameter.)

We have put in a lot of thought in hopes of making the effect silent and completely concealed, and have put tremendous effort into this process.

Even so, due to internal space constraints and the nature of the components, in a dead silent environment, there is still an inevitable sound for about one second when the mechanism is turned on. Nevertheless, in a regular performance environment, plus the performer's patter or the music, the sound can be hidden and goes unnoticed. You could perform this closeup."